When it comes to Doctor Who fan opinions, nothing is fixed, especially in recent times. For the first eight or nine years of the revival however there was one common consensus- Love & Monsters is terrible, Fear Her is terrible and possibly worse (in two separate fan polls, Fear Her was rated the second worse Who story OF ALL TIME after The Twin Dilemma. It’s worth noting both polls were conducted before Kill the Moon aired). Now having two or more bad episodes in the same series is nothing special but for two equally loathed pieces of television back to back, separating the excellent Beast two parter and the dramatic Dalek/Cyberman/Torchwood war with two virtually no budget, equally bizzare and hated episodes is fascinating to me. It’s like the reverse of what would happen later in Series 4 with the beloved Midnight and Turn Left airing within a week of each other.

END_OF_DOCUMENT_TOKEN_TO_BE_REPLACED

In this series, I’m going to be exploring Doctor Who stories that are often unfairly criticised or ignored by fandom and explore whether I think they deserve the hate. First up, the festivities on the Titanic.

It’s Christmas 2007. For some reason (either due to Primeval or some Saturday social event) I have completely bypassed Doctor Who Series 3 as it aired but on Christmas twelve years ago I am ready to watch the annual Christmas special. 70 minutes later and my seven year old mind is blown as the credits roll and I spend the night loudly and excitedly reciting the events of the episode to my mum.

That episode was Voyage of the Damned. And in the years since, it’s held a special place in my Who memories. I remember the Heavenly Host, I remember the ridiculous Buckingham Palace sequence, I remember Bannakaffalatta. I remember the Doctor (I didn’t even know who David Tennant was at the time, I just saw the Doctor and wanted to be him) flying through the sky. But is it actually good or am I being clouded by nostalgia? 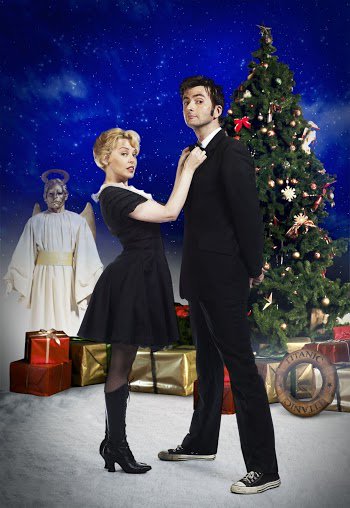 END_OF_DOCUMENT_TOKEN_TO_BE_REPLACED

Sooo, I’m an idiot and accidentally published the Stranger Things 3 review literally a day after my Spider-Man one so we got two reviews in a row. Well, it’s been a over a week since the last review so it’s once again time to dive into my totally-not-messed-up-at-this-point Month of Reviews and take a look at the Good Omens mini-series that debuted on Amazon Prime earlier this year. Based on the novel by Neil Gaiman and Terry Pratchett, the mini-series has been making waves due to its fun story, unique mythology and amazing dynamic between series leads David Tennant and Michael Sheen. As a huge fan of Gaiman’s work and as someone who wants to get into Pratchett, this series was a must watch for me. That plus the “Doctor Who effect*” was put into effect and I just had to check this out. Not only is Good Omens hilarious and unique, it’s also intelligent and ingeniously written in its perfectly paced six episodes.

END_OF_DOCUMENT_TOKEN_TO_BE_REPLACED

Television is a vast and varied format, and it’s often the episodes that break the norm of their shows that often end up being the most acclaimed. By stripping the show down to its base elements, some of the most beloved episodes in television history are “bottle episodes”. These episodes take place in a single location and only feature the core characters, or even less. These episodes are devised to save budgets and reduce the need for vast locations or guest stars, although sometimes it’s due to a desire to try something different. These five episodes from television shows I love prove that sometimes less is more, and have been responsible for some of the finest outings for their respective shows.

END_OF_DOCUMENT_TOKEN_TO_BE_REPLACED

Later this year, we will finally see the Thirteenth Doctor in action. While all the focus is on Jodie Whittaker, who looks amazing as the Doctor, let’s not forget about our new lead writer, Chris Chibnall. His announcement in January 2016 caused some fuss, as allegedly he is not seen as a good writer by a large percentage of the fandom. This completely baffled me then and continues to now, as I have always enjoyed his work on the show and found him to be a very consistent writer. Throw in his showrunning of Torchwood and we have a very competent head writer for the Whoniverse. Let’s dive into his very different but all very entertaining episodes.

END_OF_DOCUMENT_TOKEN_TO_BE_REPLACED

No dilly dallying here, let’s proceed with the countdown and see what my favourite New Series moment is-

END_OF_DOCUMENT_TOKEN_TO_BE_REPLACED

Series 11 is coming. A new Doctor, a new era. Now is the time to look back on the brilliance of the past 13 years, which has encompassed four Doctors and ten seasons. Whilst I could discuss the best episodes, that would be harder than this list, so let’s look at the best moments of the revived show. With over a hundred episodes to choose from, picking 50 was hard. I’ve decided to limit the list to one moment per story, and to leave the quality of the episode aside to focus on the moment in question. There’s too much to go through, so I’ve split the list up-