Television is a vast and varied format, and it’s often the episodes that break the norm of their shows that often end up being the most acclaimed. By stripping the show down to its base elements, some of the most beloved episodes in television history are “bottle episodes”. These episodes take place in a single location and only feature the core characters, or even less. These episodes are devised to save budgets and reduce the need for vast locations or guest stars, although sometimes it’s due to a desire to try something different. These five episodes from television shows I love prove that sometimes less is more, and have been responsible for some of the finest outings for their respective shows.

END_OF_DOCUMENT_TOKEN_TO_BE_REPLACED

On the 10th of May, 2018, Brooklyn Nine-Nine was cancelled by Fox. Ironically this was the first time I had really heard of the show, as within minutes of the news breaking several famous people I follow on Twitter expressed their shock. Never did I expect Luke Skywalker, Samwise Gamgee and the Master of Monsters to team up but Mark Hamill, Sean Astin and Guillermo del Toro, among others, begged Fox to revive a show that at that time I had no real interest idea in. 31 hours later the series was saved by NBC (thus becoming like fellow beloved ex-Fox comedy Futurama) and life went on as normal. Fast forward six months and I’m scrolling through Netflix to find a new show to watch. My decision to watch Brooklyn Nine-Nine is two-fold- firstly my love for Micheal Schur’s other NBC show The Good Place and also to see just what some of my favourite film personalities have in common other than being awesome. Two months and four seasons later (fortunately we have an airdate for Season 5 on Netflix- March 8th, so I can finally catch up) and I can’t recall a time Brooklyn Nine-Nine wasn’t in my life. Season 6 airs for the first time in the US today, and while it’ll be a while before I can see it it’s worth looking back at what we have now- 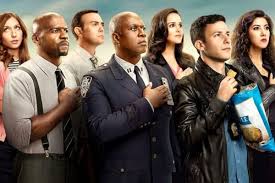